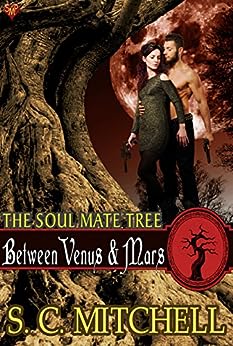 Between Venus and Mars by S. C. Mitchell

If you’re joining me from S. C. Mitchell’s blog post , or starting your hop here with me, welcome aboard.

Jenna Da Sie offers up today’s topic – Start from the end. You’re the ghost of Christmas future. Write about your life from your funeral to the present. How were you celebrated?

I consider myself kind of an expert on death, as I’ve been killed off a couple of times. In case you don’t know, I’m actually a fictional character written by HIM. HE writes me, but I write my stories.

Anyway, HE’s managed to kill me off a couple times, thinking HE doesn’t need me. I just haunt him until he brings me back. HE’s thinking about killing me off again, which is the real reason I haven’t been able to finish my latest story.

Of course, HE might die someday. then things get really complicated. Can I live on without HIM?

In the mean time, check out what Jenna Da Sie on her own topic, as the Romance Writers Weekly blog hop continues at: http://jennadasie.com/

The Backup by Kathryn Renard

If you’re joining me from Kathryn Renard’s blog post , or starting your hop here with me, welcome aboard.

Today’s topic comes from S. C. Mitchell who asks: Let’s take a trip. Pretend your publisher has offered you a two week vacation anywhere in the world to inspire a new novel. Where do you go and why?

Check out Captives of the Kratzen by S. C. Mitchell

S. C. Mitchell also has a new book that just came up for pre-order. Check out Captives of the Kratzen.

Okay, summertime and the living is easy. A vacation anywhere I want to go to inspire a new novel. It might be just what I need. My latest WIP is set in the fictional town of Bayside. I’m also kind of stuck on it, so a trip might be just the thing I need to get it moving again.

Bayside is a small, artisan community on the ocean. I haven’t decided if it’s the Atlantic or Pacific, so maybe I need two vacations to figure that out. Either New England or Oregon/Washington. I can’t really decide. So, yeah. A trip along both coasts, checking out small communities along the way. That sounds like a lot of fun.

I think I need to go pack my bags, so why don’t you go check out Jenna Da Sie’s post to find out where she’d like to be going as the Romance Writers Weekly blog hop continues at: http://jennadasie.com/

If you’re joining me from Brenda Margriet’s blog , or starting your hop here with me, welcome aboard.

Today we’re being asked: What is the story behind your name? If you have a pen name, how did you come up with it?

He never googled it, and went on to set everything up as Marc Stevens and I was born. A few months later I’m googling me, just to see it I’m making any waves and look what I found: https://en.wikipedia.org/wiki/Marc_Stevens_(actor)

Lesson learned: Always Google your pen name. (Not that I’ll probably ever create another one.)

So, is S. C. Mitchell a pen name? Find out as the Romance Writers Weekly blog hop continues at: https://scmitchell.wordpress.com/

And check out S. C.’s new release, Between Venus and Mars.

If you’re joining me from Jenna Da Sie , or starting your hop here with me, welcome aboard.

And be sure to check out Jenna’s wonderful contribution to the Holiday Hearts anthology: UPON A WINTER’S NIGHT.

Today’s challenge comes from my good friend S. C. Mitchell – Flash Fiction Challenge: Give us a romantic scene to set the mood for Valentines Day.

So here’s a little scene I woke up with yesterday stuck in my head and just had to write:

Not quite awake enough to find his chirping phone, Jason rolled to his stomach, mash is face into the sheets and pull the pillow from the other side of the bed over his ears to block the sound. He took a deep breath, then expelled a sigh. Her scent still lingered. In the sheets, on the pillow.

He gave up and pushed himself back over, clawing at the nightstand for his phone to turn off the alarm. Lying here, her essence all around, only made it worse anyway.

He pulled on his jeans, stuffed his phone in the pocket, and padded to the bathroom.

On the sink, her pink toothbrush stood next to his in the rack they’d purchased together. A cold, stark reminder she was no longer here.

His chest tightened as he picked up the toothbrush to examine it. Her mouth, those luscious lips. God, he missed her.

He dropped the toothbrush in the trash. “I was so stupid.”

Maybe he couldn’t help it. Maybe he just was stupid when it came to women. Maybe he needed to find that woman who could see past the stupid and find the real him.

He hadn’t realized how hurtful the words would be until they’d tumbled out of his mouth. He knew she was sensitive about that. It hadn’t even been what he wanted to say really, it just kind of came out all jumbled up. That happened a lot when she was around him. His mind just didn’t seem to work right.

Such a little thing. But not to her.

Then she was gone.

Socks, shoes, and his cleanest dirty shirt later, he stood at his front door. Maybe a run would help clear his mind. A long run.

Trees, fresh air, and miles down the road hadn’t eased the pain. She used to run with him, and her absence haunted him with every step.

He stopped when his phone buzzed. Pulling it from his pocket, he checked the screen before answering.

“I miss you.” Her voice so small, tentative. “I was stupid.”

His heart warmed. “No, I was stupid.”

“Could we, maybe, be stupid together again?”

Before he’d even hung up, he’d turned and started sprinting back the way he’d come. He couldn’t get home fast enough, but he did need one little side trip.

I’ll need to pick up a new, pink toothbrush,

So what do you think. Let me know in the comments below, then hop along to see what the wonderful Kathryn Renard wrote, as the Romance Writers Weekly blog hop continues at: http://www.kathrynrenard.com/

Wow, January 12 again already? Where does the time go?

I’m not real. (Probably not a big revelation.)

I was created 4 years ago today as a vehicle for HIM to experiment. And by that I mean, write deeper sex scenes in HIS books.

And with that in mind I launched my first blog 4 years ago: https://marcstevenserotica.wordpress.com/2013/01/12/sex-happens/

Happy Birthday to me!

Over those four years I have “lived” and evolved. From pure sex to sexy romance. Even putting out a somewhat legitimate, traditionally published story: Suburban Spies.

HE never saw that coming four years ago. He even tried to kill me off a couple of times. And I just kept coming back.

So, what’s in the future for me. Hard to tell.

HE has a lot on his plate, and tends to ignore me for long periods at a time, but I’m still here, so that’s something.

I do have a full novel in the works, but it probably won’t be out any time soon.

So happy to share my new video trailer for Suburban Spies:

If you’re joining me from S. C. Mitchell’s blog, or starting your hop here with me, welcome aboard.

I supplied today’s topic – Flash Fiction Challenge: Planes, trains, and automobiles (or even boats) give us a quick scene set on/in a moving vehicle.

I picked this topic because I was remembering back to my entrance into the Mile High Club: https://marcstevenserotica.wordpress.com/2013/03/23/jet-lag-and-the-mile-high-club/

It was an interesting time in my life. I never did get around to writing the whole story, and I’m probably never going to. I’ll leave that to your imagination. But that experience inspired today’s challenge to my RWW teammates.

So, here’s something new, and (mostly) fictional:

Clive was more used to flying commercial, crushed between two strangers in the center seat with someone’s baby screaming in the seat behind. Okay, not always that bad, but God, he’d been there. He’d rather drive, take his time, and arrive with his mind intact.

“We need you today.” Tom Wendt wasn’t just offering him a part in his new movie. He was giving him the roll of a lifetime. Slade Steele, in the movie version of Marc Stevens’ Suburban Spies.

Clive couldn’t say no to next summer’s hottest romantic blockbuster.

Then Tom surprised Clive by sending a private plane. “I know how you hate to fly.” A comfortable Leer jet, pilot, co-pilot, and Jennifer.

“Nice.” He was talking about the plane. Then again, maybe he wasn’t.

Jennifer motioned him in. “Take a seat, Mr. Matthews. We’ll be taking off shortly.”

He buckled into the cushy single seat. I could get used to this.

She took the seat across from him, giving him a chance to study her.

Piercing blue eyes, and plump red lips were framed by a fall of golden curls. A low-cut uniform that offered a generous hint of cleavage.

“I loved you in Island Heat.” Her eyes widened as her tongue dragged across her lower lip.

“Don’t tell me you actually watched that.” Nobody admitted to watching Island Heat. While Clive thought he’d turned in an acceptable performance, the film was so poorly edited, it was almost unwatchable. Still, there was that love scene that went viral on Youtube, but with the lovely Miss Paige playing opposite, that wasn’t really acting.

Jennifer unbuckled her seat belt as the plane leveled off. “I thought you were great.”

God. Clive Matthews. Everyone knew he was the next big thing in Hollywood, even though Island Heat bombed at the box office something fierce. That hadn’t been his fault, and his performance shined through the shitty production. Especially that hot sex scene.

Jennifer took a deep breath, trying to center herself. This was no time to go all fan-girl over him. “Can I offer you coffee . . . something stronger?” Me?

What girl in her right mind would turn down that invitation?

She fought to keep the excitement from her tone. “White or red?”

“Surprise me.” His tone dripped with orgasmic invitation.

A sensual wave cascaded through her.

Oh, she planned to surprise him.

Sorry. I gotta stop there. I’ll let you fill in what happens next.

Then hop a train over to A. S. Fenichel’s bog as the Romance Writers Weekly blog hop continues: http://asfenichel.com/blog/

Tainted Bride by A. S. Fenichel

Raider of the Lost Blonde

A Man in the Shadows

Whipped Cream and other Delights

That Girl Across The Hall